The story of MAKE ART/STOP AIDS spans from Kolkata to Los Angeles, Mexico City to Rio de Janeiro, and from Johannesburg to Mumbai.

UCLA Professor David Gere established the MAKE ART/STOP AIDS network while on a Fulbright research grant in India. In July 2004, Gere led a four-day workshop in Kolkata with 60 Indian and 15 international artists and activists under the MAKE ART/STOP AIDS banner. A subsequent day-long event in New Delhi brought the concepts developed in the workshop to the attention of leaders from the Indian government, media, and non-governmental organizations.

During this time, Director Tom Keegan chronicled the experience of Gere and his partner, Peter Carley, as they raised their two children in India. The resulting documentary film Out in India: A Family's Journey premiered in 2008. More information on the film can be found at outinindiathemovie.com »

A result of Gere's work in 2004, a health communication organization called Nalamdana (meaning “Are you well?” in Tamil) began collaborating with the Government Hospital of Thoracic Medicine in Tambaram, India, just outside Chennai. Are You Well has today evolved into a leader in its field, using theater, music, and radio as tools for HIV education, stigma reduction, and to promote an atmosphere of healing. The key to success has been a close working relationship between medical staff and artists.

Patients in an HIV ward listening to the Are You Well radio broadcast. The cable radio speaker is on the near wall. (Photo by Gideon Mendel)

The Are You Well sound studio at the Government Hospital of Thoracic Medicine, Tambaram, India. (Photo by Gideon Mendel)

Patients at the Government Hospital of Thoracic Medicine enjoy a performance by Nalamdana. (Photo by Gideon Mendel)

A live performance, part of the Are You Well Initiative at the Government Hospital of Thoracic Medicine in Tambaram, India. (Photo by Gideon Mendel)

Photo by Gideon Mendel at the Government Hospital of Thoracic Medicine, Tambaram, India.

Actors preparing to perform at the Government Hospital of Thoracic Medicine in Tambaram, India. (Photo by Gideon Mendel)

The Keiskamma Altarpiece, shown here at UCLA, is a powerful declaration of hope and solidarity in the fight against HIV/AIDS.

UCLA student puppeteers rehearse in front of the altarpiece.

David Gere and members of the MAKE ART/STOP AIDS team.

A monumental, multi-panel artwork was created by 130 women from South Africa’s Eastern Cape province — an area of the world hard hit by AIDS — to commemorate the lives and memory of individuals there who have died of the disease and to celebrate the community’s determination to prevail in the face of AIDS. 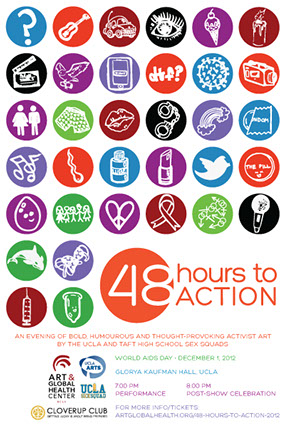 A dynamic evening of entertainment to observe World AIDS Day. 48 Hours to Action originally began in 2006 in conjunction with the arrival of the Keiskamma Altarpiece to UCLA. Each year the event has taken on a slightly different shape, even in more recent years. The event is very decidedly 48 Hours “to” Action and not 48 Hours “of” Action. The real action begins when the audience leaves the theater more aware and mobilized to act in the outside world.

The original version of Kevin Kane’s innovative theater piece Flesh and Blood was made in response to the Keiskamma Altarpiece, on display at UCLA in 2006 – 2007.

Dancers perform Flesh and Blood during the stirring introduction to the show.

Flesh and Blood combined many different elements, including intricate movement.

Flesh and Blood was a dynamic event, making audiences laugh and think.

Flesh and Blood invited audiences to reevaluate how they think about hip-hop and HIV/AIDS.

In 2006 – 2007, Kevin Kane and a cast of twelve created Flesh and Blood in response to the monumental Keiskamma Altarpiece, then on view at UCLA. The moving hip-hop dance-theater piece told the story of a young boy living with HIV in Hamburg, South Africa, where the altarpiece was created. Kane traveled there himself to bring that reality into clearer focus.

One of the auto-rickshaws was adorned with pictures of Thukral & Tagra’s HIV flip-flops.

The ArtMoves auto-rickshaws made an appearance at the 2008 International AIDS Conference in Mexico City.

Parthiv Shah of CMAC and David Gere field questions in front of an ArtMoves display.

Better described as a moving event or “happening” than an exhibition, ArtMoves was a fully portable, arts-based AIDS intervention conveyed and displayed on retrofitted auto-rickshaws or other local conveyances.

Twelve student photographers, twelve student writers, and twelve people living with HIV/AIDS worked together to create this collective portrait exploring the meaning of AIDS in Los Angeles in the year 2007. The project eventually developed into what is now known as Through Positive Eyes.

Opening at the UCLA Fowler Museum on February 23, 2008, the MAKE ART/STOP AIDS Exhibition was greeted by one of the largest crowds in the museum's history. An estimated 800 people, including both invited guests and the general public, viewed a performance of Biro by Ntare Guma Mbaho Mwine and then flowed into the exhibition gallery. Fowler Museum staff commented that the opening for MAKE ART/STOP AIDS was not only one of the largest events the museum had ever hosted in terms of attendance, but also that it was the most diverse.

Participants in a theater-based stigma-reduction intervention, take part in a drama exercise, building the intimacy that is so inherent to the project.

The overall goal of MAKE ART/STOP AIDS Africa is to educate, mobilize, inspire, and encourage dialogue through arts interventions in African universities and in rural and urban poor communities throughout the southeast Africa region. The program relies on collaborative relationships with local, regional, and international organizations operating in each project country.

This is My Story

A documentary by filmmaker Mark Eby about the UCLA/CHANCO Performance Project, which took place in Zomba, Malawi in 2008.

The first chapter of the international photography project of HIV-positive people in cities around the world.

South African artist Brenton Maart explores gay sexuality in the age of AIDS in his piece Factory Crossword. The Factory is a gay sex club in Johannesburg, South Africa.

Medicine Man (right) is one of the signature pieces in the internationally touring Not Alone exhibition. It was created by San Francisco artists Daniel Goldstein and John Kapellas with 400 prescription pill bottles.

Justice Edwin Cameron of the Constitutional Court (South Africa's Supreme Court) is open about being gay and HIV-positive.

He opened the Not Alone exhibition in Johannesburg.

Dr. Carol Hofmyer speaks to the crowd in front of the Keiskamma Altarpiece, part of Not Alone displayed at Museum Africa.

Dr. David Gere and South African Constitutional Court Justice Albie Sachs pose for the camera at the opening of Not Alone in Johannesburg, South Africa on July 19th, 2009.

Not Alone, as displayed at Museum Africa in Johannesburg, South Africa, chronicles artists' responses to the AIDS epidemic, from the 1980s to the current day.

An international touring adaptation of the MAKE ART/STOP AIDS Exhibition that showcases the role of the arts in fighting the AIDS epidemic globally. 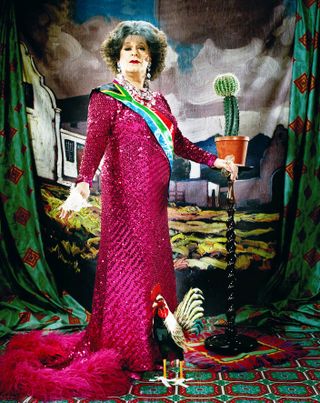 An irreverent look at sex and politics by South African performance artist and satirist Pieter-Dirk Uys performed at UCLA.

The 2010 – 2011 UCLA Sex Squad in action during a riveting performance at a Los Angeles high school.

Originally known as the AIDS Performance Team in its first year under the direction of Pieter-Dirk Uys, the group continues today as the UCLA Sex Squad, a collective of undergrads that uses life experiences and creative talents to create funny, multimedia theater to open dialog with teens about sex and sexuality.

In June 2009, the international photography project of HIV-positive people in cities around the world continued in Brazil.

In March 2010, the international photography project of HIV-positive people in cities around the world continued in South Africa.

Originally known as AMP it Up!, AMP! is the UCLA Art & Global Health Center's Arts-based, Multiple-intervention, Peer-education HIV & STI prevention program for high school youth in Los Angeles and beyond.

A course based out of the Department of Fine and Performing Arts, Chancellor College, University of Malawi, that engages drama students in hands-on experiences in designing and implementing their own arts-based interventions with communities on- and off-campus. 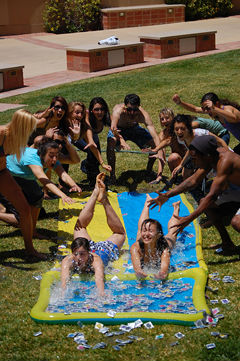 When the Situation Gets Slippery

In April 2011, the international photography project of HIV-positive people in cities around the world continued in Southern California.

Premiering on World AIDS Day, December 1, 2011, The A.R.T. Show is a touring exhibition of work by southern African artists responding to the HIV/AIDS epidemic in an age of antiretroviral treatment. 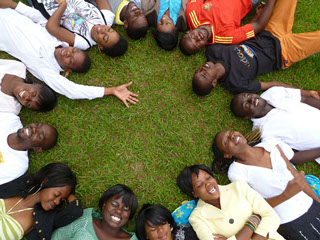 A seed grant program encourages college students in Malawi to think creatively about their responses to challenges they see in society, to cultivate co-operation and mutual support, and to enhance their skills in project design, implementation and management.

A documentary by Film maker Ya-Hsuan Huang, that tells the story of the MAKE ART/STOP AIDS Malawi project.

This is Not a Textbook: An Oral History of the UCLA Sex Squad

An autobiographical documentary directed, shot, and edited by UCLA student performers in the UCLA Sex Squad.

In July 2012, the international photography project of HIV-positive people in cities around the world continued in the U.S. capital.

In January 2013, the international photography project of HIV-positive people in cities around the world continued in the India with fourteen participants. 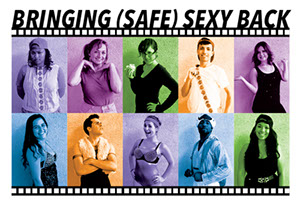 A collection of UCLA Sex Squad work from 2011 – 2013 adapted for film and to be distributed throughout LAUSD and worldwide on the web.

MAKE ART/STOP AIDS is an initiative of the UCLA Art & Global Health Center.